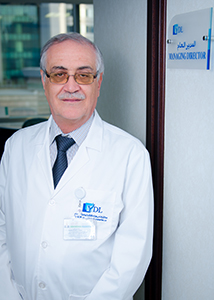 Founder and Managing Director of York Diagnostic Laboratories, JLT, 2009, UAE. Has also founded/owned the first clinical reference laboratory in UAE in 1982. Leader, and a passionate researcher (Food Intolerance Test). He founded and become a member of couple of organizations worldwide and led higher committees in Ministry of Dubai, UAE.